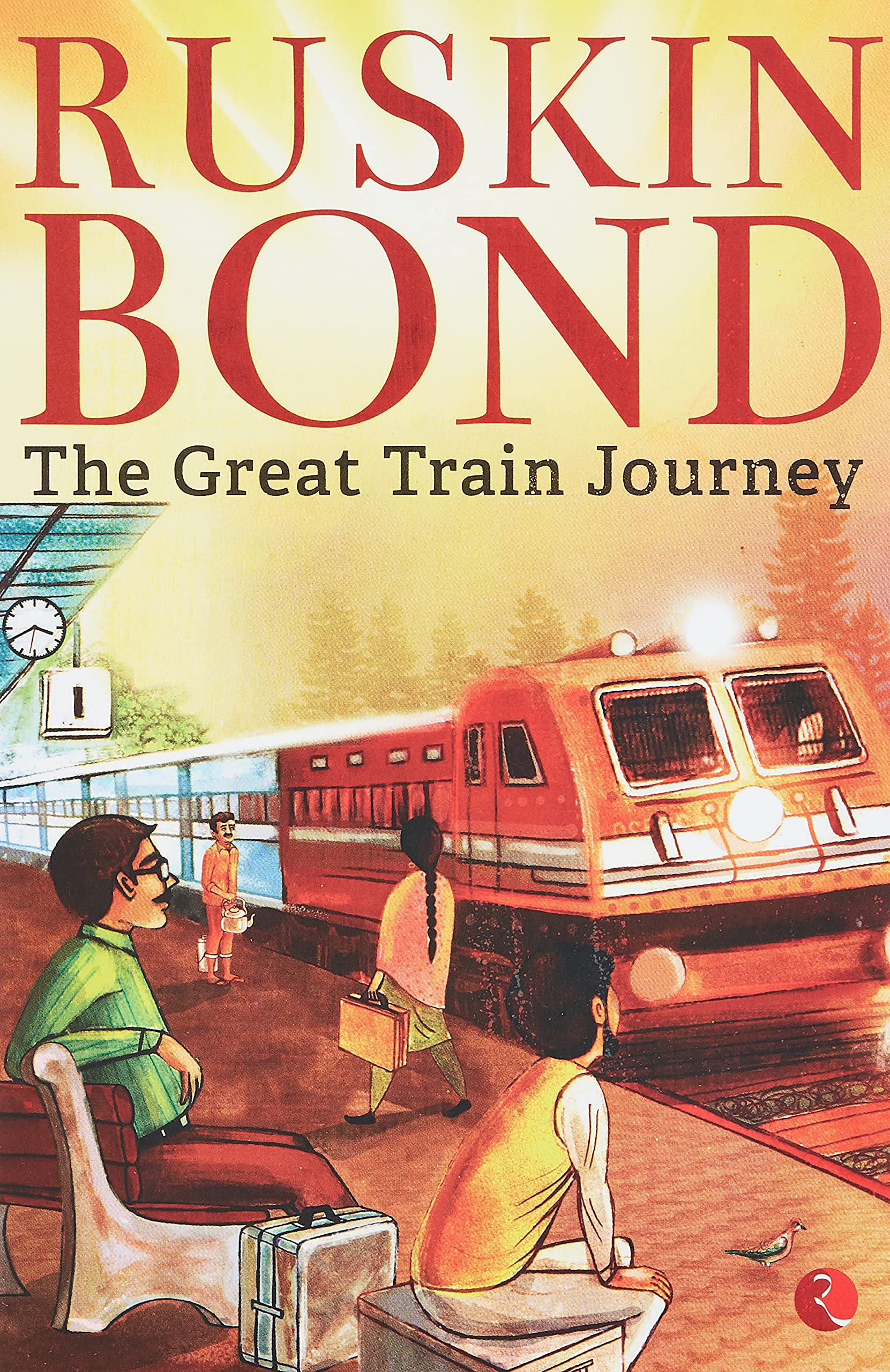 Suraj waved to a passing train, and kept waving until only the spiralling smoke remained. He liked waving to trains. He wondered about the people in them, and about where they were going and what it would be like there. And when the train had passed, leaving behind only the hot, empty track, Suraj was lonely.

He was a little lonely now. His hands in his pockets, he wandered along the railway track, kicking at loose pebbles and sending them down the bank. Soon there were other tracks, a railway-siding, a stationary goods train.

Suraj walked the length of the goods train. The carriage doors were closed and, as there were no windows, he couldn’t see inside. He looked around to see if he was observed, and then, satisfied that he was alone, began trying the doors. He was almost at the end of the train when a carriage door gave way to his thrust.

It was dark inside the carriage. Suraj stood outside in the bright sunlight, peering into the darkness, trying to recognize bulky, shapeless object

He stepped into the carriage and felt around. The objects were crates, and through the cross-section

of woodwork he felt straw. He opened the other door and the sun streamed into the compartment, driving out the musty darkness.

Suraj sat down on a packing-case, his chin cupped in his hands. The school was closed for the summer holidays, and he had been wandering about all day and still did not know what to do with himself. The carriage was bare of any sort of glamour. Passing trains fascinated him—moving trains, crowded trains, shrieking, panting trains all fascinated him—but this smelly, dark compartment filled him only with gloom and more loneliness.

He did not really look gloomy or lonely. He looked fierce at times, when he glared out at people from under his dark eyebrows, but otherwise he usually wore a contented look—and no one could guess just how deep his thoughts were!

Perhaps, if he had company, some fun could be had in the carriage. If there had been a friend with him, someone like Ranji…

He looked at the crates. He was always curious about things that were bolted or nailed down or in some way concealed from him—things like parcels and locked rooms—and carriage doors and crates!

He went from one crate to another, and soon his perseverance was rewarded. The cover of one hadn’t been properly nailed down. Suraj got his fingers under the edge and prised up the lid. Absorbed in this operation, he did not notice the slight shudder that passed through the train.

He plunged his hands into the straw and pulled out an apple.

It was a dark, ruby-red apple, and it lay in the dusty palm of Suraj’s hand like some gigantic precious stone, smooth and round and glowing in the sunlight. Suraj looked up, out of the doorway, and thought he saw a tree walking past the train.

He dropped the apple and stared. There was another tree, and another, all walking past the door with increasing rapidity. Suraj stepped forward but lost his balance and fell on his hands and knees. The floor beneath him was vibrating, the wheels were clattering on the rails, the carriage was swaying. The trees were running now, swooping past the train, and the telegraph poles joined them in the crazy race.

Crouching on his hands and knees, Suraj stared out of the open door and realized that the train was moving, moving fast, moving away from his home and puffing into the unknown. He crept cautiously to the door and looked out. The ground seemed to rush away from the wheels. He couldn’t jump. Was there, he wondered, any way of stopping the train? He looked around the compartment again: only crates of apples. He wouldn’t starve, that was one consolation.

He picked up the apple he had dropped and pulled a crate nearer to the doorway. Sitting down, he took a bite from the apple and stared out of the open door.‘Greetings, friend,’ said a voice from behind, and Suraj spun round guiltily, his mouth full of apple. A dirty, bearded face was looking out at him from behind a pile of crates. The mouth was open in a wide, paan-stained grin.

‘Er—namaste,’ said Suraj apprehensively. ‘Who are you?’

The man stepped out from behind the crates and confronted the boy. ‘I’ll have one of those, too,’ he said, pointing to the apple.

Suraj gave the man an apple, and stood his ground while the carriage rocked on the rails. The man took a step forward, lost his balance, and sat down on the floor. ‘And where are you going, friend?’ he asked. ‘Have you a ticket?’ ‘No,’ said Suraj. ‘Have you?’

The man pulled at his beard and mused upon the question but did not answer it. He took a bite from the apple and said, ‘No, I don’t have a ticket. But I usually reserve this compartment for myself. This is the first time I’ve had company. Where are you going? Are you a hippy like me?’ ‘I don’t know,’ said Suraj. ‘Where does this train go?’

The scruffy ticketless traveller looked concerned for a moment, then smiled and said, ‘Where do you want to go?’

‘Then you’re on the right train,’ said the man. ‘This train goes everywhere. First it will take you to the sea, and there you will have to get on a ship if you want to go to China.’