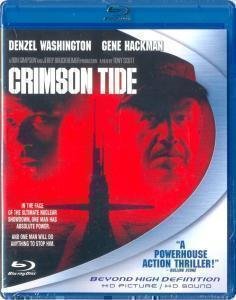 Starring Academy award winners Gene Hackman and Denzel Washington, the Crimson Tide film is an epic submarine war movie directed by Tony Scott. This movie depicts a dark timeline, where after the fall of the Soviet Union, a dissatisfied Russian Leader takes command of a nuclear weapons arsenal, threatening to launch unless his demands are met by both superpowers. Crimson Tide English movie features Alabama, a nuclear submarine, led by Captain Frank Ramsey is assigned to patrol the waters, and launch if needed. Second in command to him is Lieutenant Commander Ron Hunter (Washington) who is a decorated officer, but has no combat experience. The Alabama is now ordered to launch missiles against the Russian base, but before a confirmation order can be received, she is attacked by the enemy, resulting in her communication array being crippled.Crimson Tide Movie delves into the high-stress environment of submarine warfare as well as the threat of global nuclear war. Ramsey and Hunter differ in their views on launching the missiles, as there is no confirmation order, resulting in tense stand offs, as well as mutinies. Surrounded by enemies, these men argue about the choice to launch the missiles, which may lead to all out nuclear war, or not launching and leaving their nation and the free world unprotected. While the story and special effects themselves are more than enough to keep you on the edge of your seat, The Crimson Tide movie blu ray also features performances by these two veteran actors who hold nothing back and take you to a nail biting finish. So, if you’re a war movie fan, this movie is an excellent choice for you.
Rated ‏ : ‎ U/A (Parental Guidance)
Package Dimensions ‏ : ‎ 18.03 x 13.76 x 1.48 cm; 80 Grams
Director ‏ : ‎ Tony Scott
Run time ‏ : ‎ 1 hour and 56 minutes
Actors ‏ : ‎ Denzel Washington, Gene Hackman, Matt Craven
Dubbed: ‏ : ‎ English
Subtitles: ‏ : ‎ English, French, German
Studio ‏ : ‎ Sony DADC
ASIN ‏ : ‎ B00BJLXS2Q
Country of Origin ‏ : ‎ India
Manufacturer ‏ : ‎ Sony DADC
Item Weight ‏ : ‎ 80 g